I recently switched to using Linux for my desktop workstation again, in the form of a System76 Oryx Pro. I'd previously used an iMac primarily with Windows bootcamped onto it (for game compatibility). It took me a while to realize, but at that point, I might as well have used a Windows laptop. The iMac, for how nice and quiet it is, is pretty useless as an iMac when you just run Windows on it, so I decided to sell it and get something else, maybe even something that's portable. After a while, I settled on the Oryx Pro.

I live outside of the primary range of delivery for System76 since they're an American company, but thankfully they ship worldwide (though that comes with a ~100€ shipping fee). There was also a ~350€ import tax that I hadn't really anticipated since I never get things imported.

I went for a pretty baseline model with 16GB of RAM, an RTX 2060 and a 500GB NVMe SSD. You could go a lot more powerful, but even at this configuration, it'll cost you around 1700€. I chose "3-day quick assembly" (an extra 50 bucks) because I wanted it to arrive before Christmas. Their staff was very nice in communicating the progress of the assembly, but I would have preferred if they hadn't tried to call me (it's a nice gesture, sure, but because of Reasons it gives me the creeps when someone tries to do that). The shipping, too, was timely, and with the exception of the customs holdup taking one day too long because UPS' website didn't function, it came on time.

The laptop itself looks very nice. I especially like the back cover, which looks like some kind of weird futuristic thing, but not in the "Gaming Laptop" sense:

There's a bit of chassis flex everywhere, and the hinge isn't as tight as I would like it to be, but for a 16 inch laptop, the build quality is nice overall. The keyboard feels good too. There's a bit of travel, and it stays quiet (quieter than a ThinkPad keyboard), but it's still satisfying to type on. There is some weird key placement going on, specifically with the right shift key, which is cut in size in favor of the up arrow, which, coming from a ThinkPad keyboard, makes me hit the arrow by accident a lot of times. I also wish there was a configuration option to remove the numpad, since I never use it and never will, but it's something that's fairly easy to get used to. Oh, and it has backlighting in different colours, if you're into that.

Preinstalled with the laptop comes Pop_OS!, which takes the cake as the most awful distro name to come preinstalled on something. That being said, I've been using it for a bit now and it's been pretty nice! It's based off Ubuntu, which, for all its flaws, gives you the broadest range of software availability, and is arguably one of the most newcomer-friendly Linux distros. Pop uses a customized version of the GNOME shell, which looks pretty good, and while I'm not a huge fan of the size of GNOME's window title bars, it does make for a nice experience overall.

The primary reason I've been running Windows and/or MacOS is to play Final Fantasy XIV, a MMO that unfortunately only really runs well on Windows (the official MacOS version is nothing more than a Wine wrapper). However, after a couple hours of fiddling around with Wine and Lutris, I managed to actually get the game to run, and with about 90% of the performance I'd have on Windows! This is mainly due to DXVK, a Wine tool that translates DirectX system calls to Vulkan system calls (I believe), which makes it possible to play many AAA video games on Linux. The only downside to this is that while playing the game, the fans on this laptop run at maximum speed, even though it doesn't really get hot, just warm, but I'm willing to chalk that up to Wine or something.

On everything else, though, the fans either run really quiet or with moderate speeds, but it never really gets annoyingly loud. I haven't really felt the laptop get hot until now, either.

It's worth noting that you can only use the RTX card in the laptop if you "boot" into the desired compatibility mode (this can either be the RTX, Intel integrated graphics, or some sort of hybrid mode). You need to reboot to switch between these, which I think takes a bit longer than a normal reboot, but aside from battery life, there's nothing that really stops me from using the RTX all the time (at least at my desk). Additionally, external monitors only work in RTX mode. 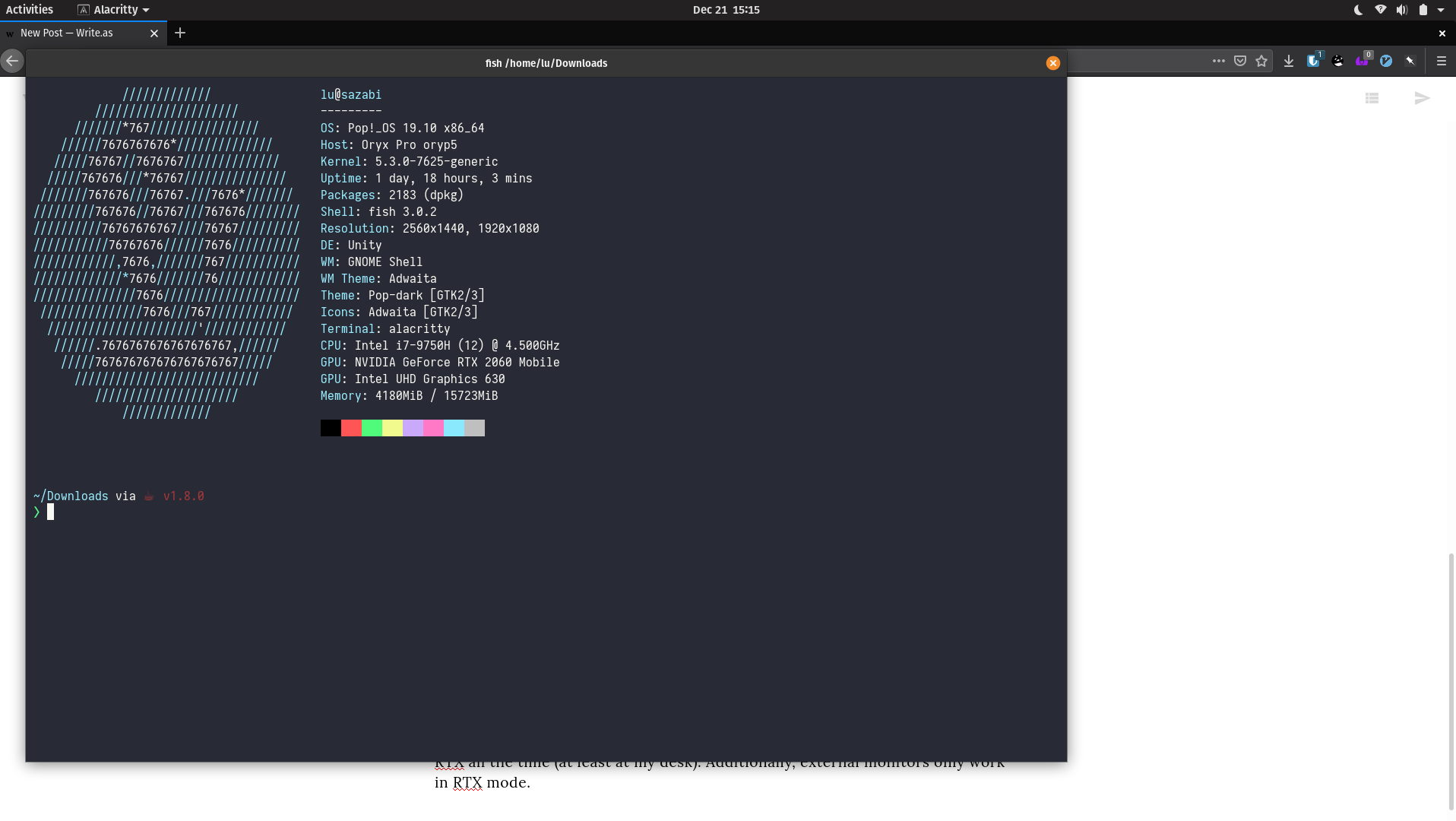 I'm pretty happy with this laptop. The build quality is good, the Pop_OS! distro is decent enough for my liking, it's very nice to have a desktop-grade GPU inside such a (relatively) compact laptop. System76 also sells other, smaller and less expensive laptops on their website, so if you're American, that might be worth checking out (they have some with coreboot too). I think if you're in Europe, there's some companies that do almost the same thing as System76 does in the US too, but I forget what they're called.